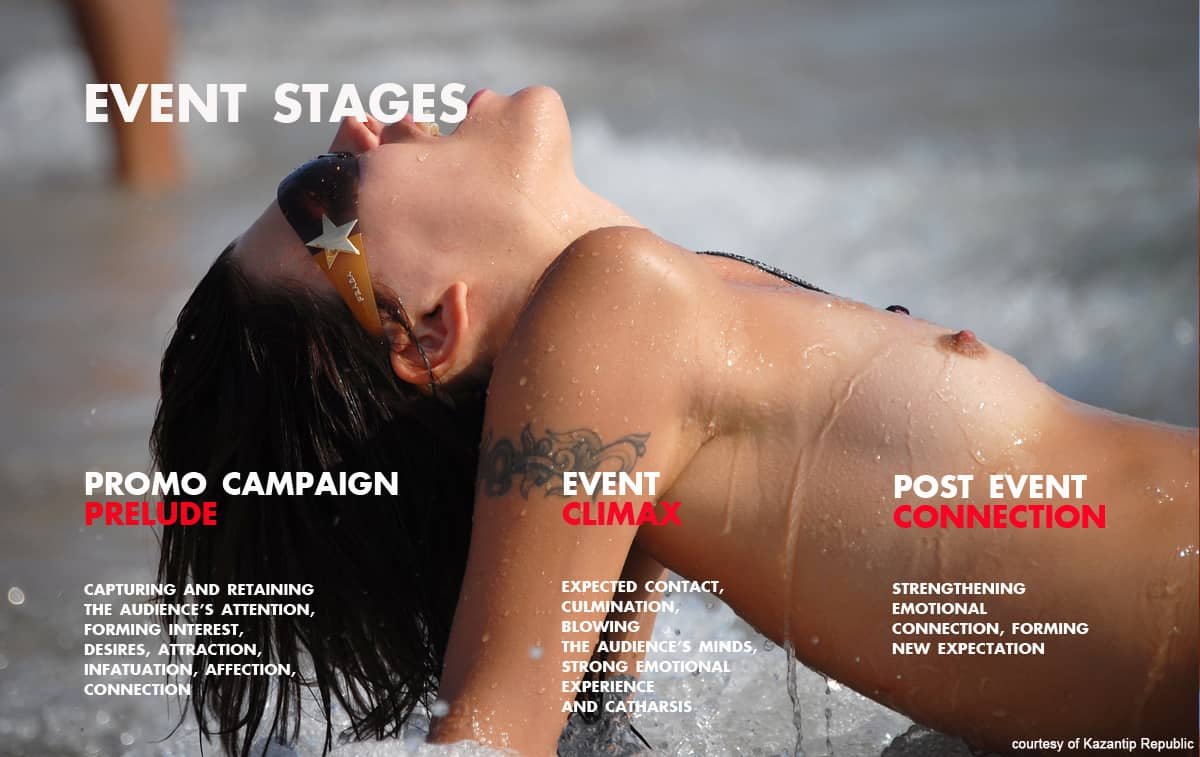 1. COMMUNICATION STRATEGY AS A PRELUDE

— Language is a skin: I rub my language against the other.
It is as if I had words instead of fingers, or fingers at the tip
of my words. My language trembles with desire. — Roland Barthes

By a prelude—the purpose of which is to turn on a partner—is often meant some formal and asexual fuss in the beginning of a sexual act. But we think that a top-notch prelude begins at the moment when you first time exchanged an interested gaze. Then you have to grow that volatile initial interest into appetence, escalate it to the maximum and turn into affection. Preferably, into love.

In the sense of organizing an event, prelude begins from the moment you launched your campaign, presented your brand or project first time, utterrd your first word. You should capture the audience’s attention at the first sight and retain it. The task of communication campaign is to broadcast your brand’s essence and ideology (and temper, and spirit), but in such a way so that the TA you laid your eyes on got hooked. Know their hooks, memes and preferences; seize their attention and grow into steady interest, then into the strong desire to be involved in your project. Using passion, empathy, technical skills you have to magnetize and electrify the air, to make the audience think of you and want you. In short, you have to charm your audience, and for that you have to be… come on, it’s easy — you have to be charming! Interesting, intriguing, exciting, bold, funny, warm, unpredictable—simple as that. :]

We will consider some tricks in the next blog. 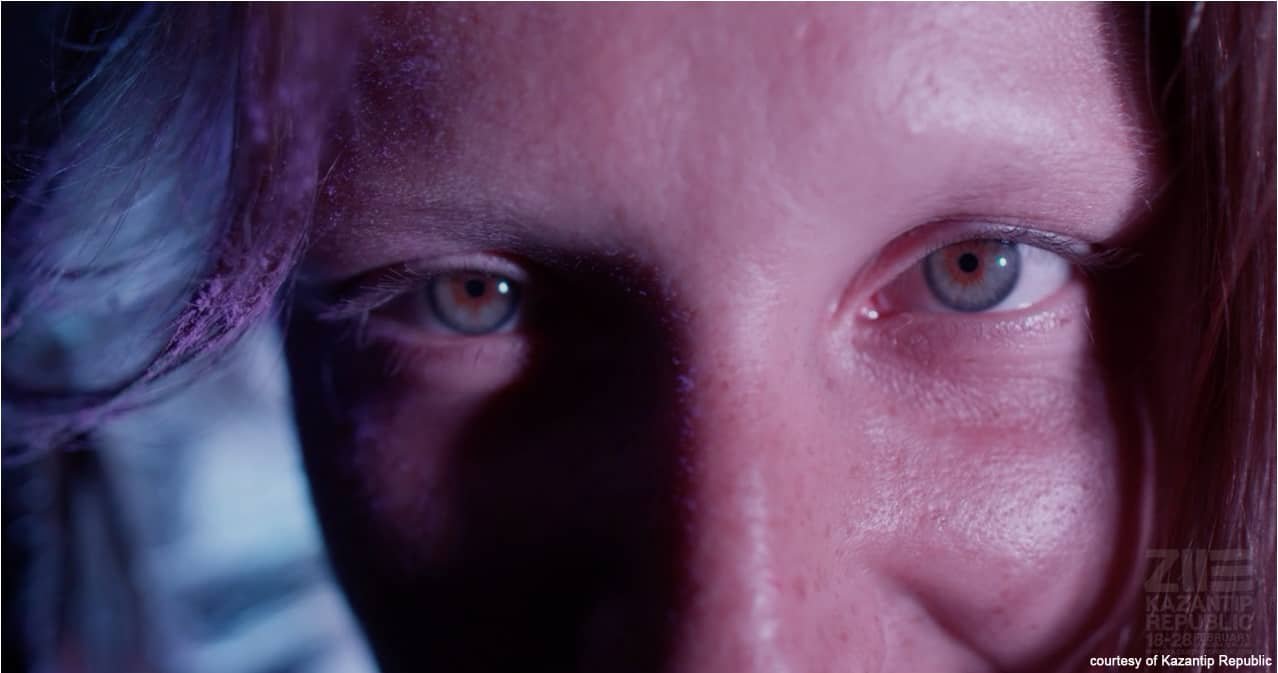 — The Climax is the principle part of the story for which all the machinery
of planning and constructing has been set in motion. — Syd Field

If the promo campaign is a prelude and marketing communication is supposed to captivate and seduce the audience, capture their attention and conquer their hearts and minds, then the event itself is culmination of all your efforts, long-awaited merging with your audience. That, in turn, is also eager of your event and fairly expects from it an emotional orgasm and reboot.

Speaking in dramaturgy terms, everything you do, all your communications and actions is a narrative, a tale you start telling from day one of your promo campaign. An event is a climax of this story, its obligatory scene and denouement — the highest point of tension and excitement, resolution and expression the core idea. You have to be technically and empathetically precise on this stage too, and give the audience what it wants— the desired catharsis. Albeit not in the way it expects — this is the first commandment of a good director. So yes, an event must become a shake and a catharsis, it’s a must. No matter whether your event is small or big, for 100 or for 100K people, made on corporate brands’ money or funded by an NGO, it must touch people, shift their perception, be a strong emotional experience.

But hey, if you your promo campaign was performed well, by the moment of an event your public would be already crazy about you, tuned and turned on. Just don’t make rough mistakes during an event and do not disappoint them. 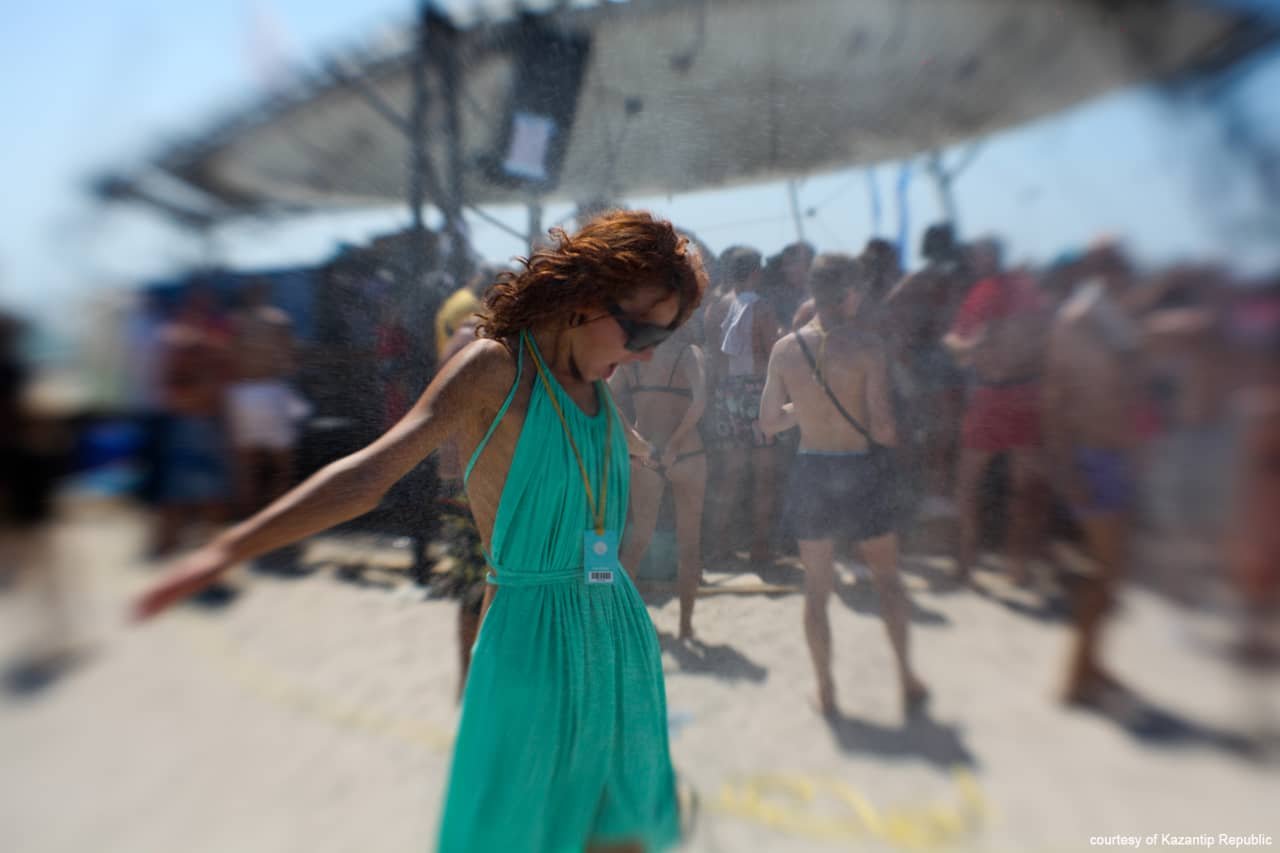 ‘After sexual union, each of the animals is sad’. And after a saturated event people can feel overwhelmed, exhausted, nostalgic or a bit sad (especially if it was a great event). Utilized in a right way, these emotions can reinforce the emotional connection and closeness with your audience.

Only indifferent, short-sighted and stupid unprofessional people can make an event, earn some bucks and points and then relax. Don’t turn away to the wall—this is not a one-night stand, you are building relationships with your audience. Tenderness, gratitude, ‘it’s been so cool, we have to repeat it!’—this is the message at this stage. Use this time to make people start dreaming about the next event right away. Retaining attention is not less important than capturing it and if you managed to win the audience’s heart and make it yours, it’d be very stupid to loose it due to ignoring post-event communication. 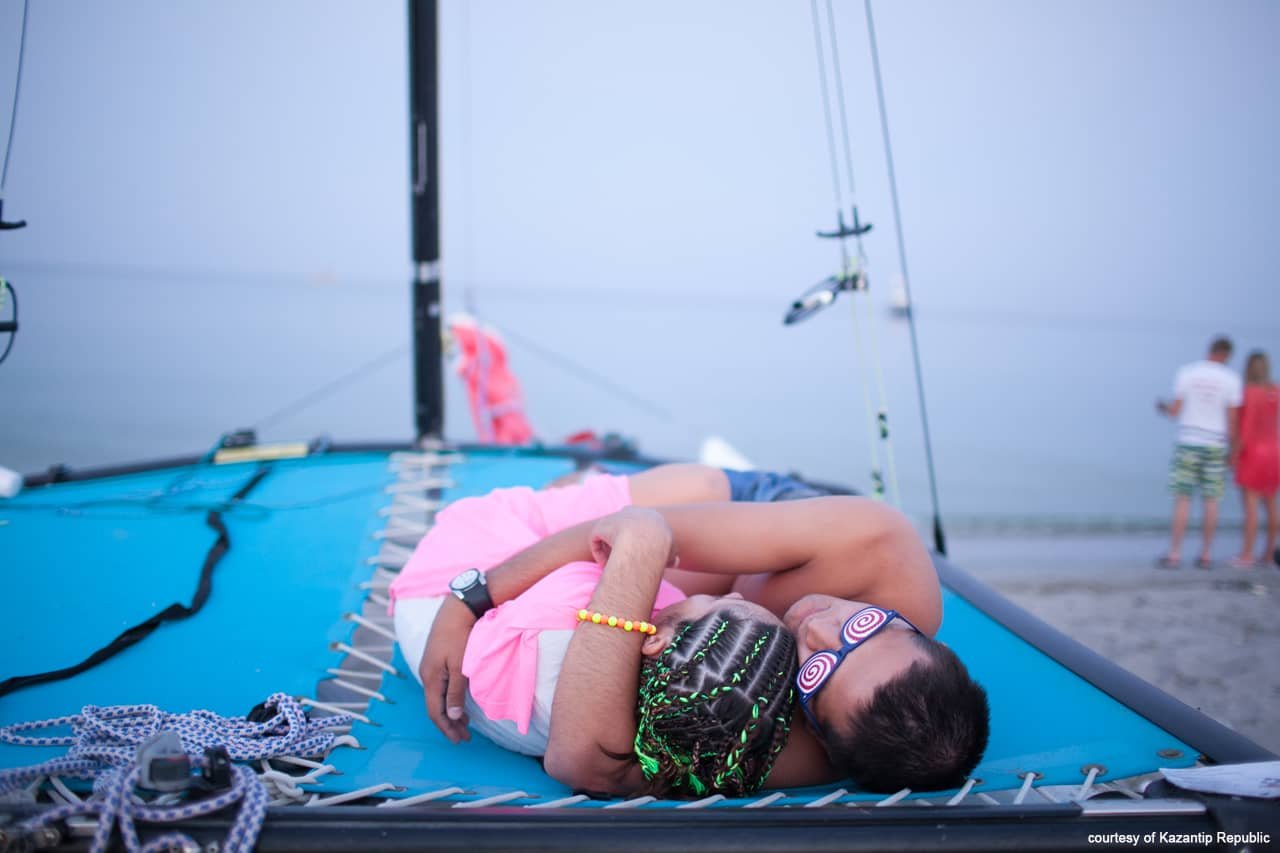 Now we are going to break the 4th wall and confess that we’ve cheated a bit, having lured you into believing that we would talk about sex here. And then, not even really hiding our agenda, gradually shifted accents towards a trivial idea that love is the main ingredient of both good sex and a great event. Not because we are romantics to the bone, but because love is the most breathtaking attraction that ever existed, more terrific than those at Six Flags. And game, tease, entice, interest, thrill, affection are not only love’s attributes, but also inalienable components to the great entertainment. So why not use them?

In the end we’d love once again to mention Kevin Roberts and his concept of a lovemark. In spite of simplicity and beauty of this notion that now became a full-fledged marketing term, it was percepted as very provocative and ambiguous at the time of its appearance.

— Lovemarks was a vehicle to move clients to more emotional territory. Some were asking to be taken there because they too were realizing that more information would not move more product. Rather than asking “how much metal did you move today?”, we reframed the question “how much does the metal move you?” In other instances, clients ran away from Lovemarks and the L word because it was too provocative, but two things happened. We found alternative language that people were comfortable with such as ‘Loyalty Beyond Reason’ to represent the same idea. And we were subversive. One of the examples I’ve put out there to doubters is — what answer do you think I always get when I ask CEOs this question: ‘Do you want your brand to be liked? Or do you want your brand to be liked AND loved?” Put this way, it’s a no-brainer. — Kevin Roberts

We hope that now, 12 years later, there’s no need for cautious and smooth formulations and that business people are not confused with the ‘L word’ anymore and on the contrary strive for it. We do really hope so. Even if not, we are going to keep being subversive and put it even more straightforwardly, at the risk of sounding cynical and provocative:

If you want to create not just some events, but awesome, amazing, breathtaking, spectacular, thrilling, exciting, mindblowing, unbelievably wonderful experience, you have to know how to amaze, to thrill, to take a breath away, to blow minds. If you want your project to be loved, you have to know how to incite love. So we are talking of making love, literally — how to love your audience, how to make them love your project. All of us should learn to be skillful empathetic lovers, learn to cause, retain and grow love—and so should brands. They should learn to become magnetic, seduce their customers, make them fall in love with their products and ideas. Because there’s just one thing in life that every human being desires more than to be loved.

Part I: A Great Event As Great Sex

Part III: How To Infatuate Your Audience

* based on works of the Russian psychologist and sexologists Marina Komissarova.