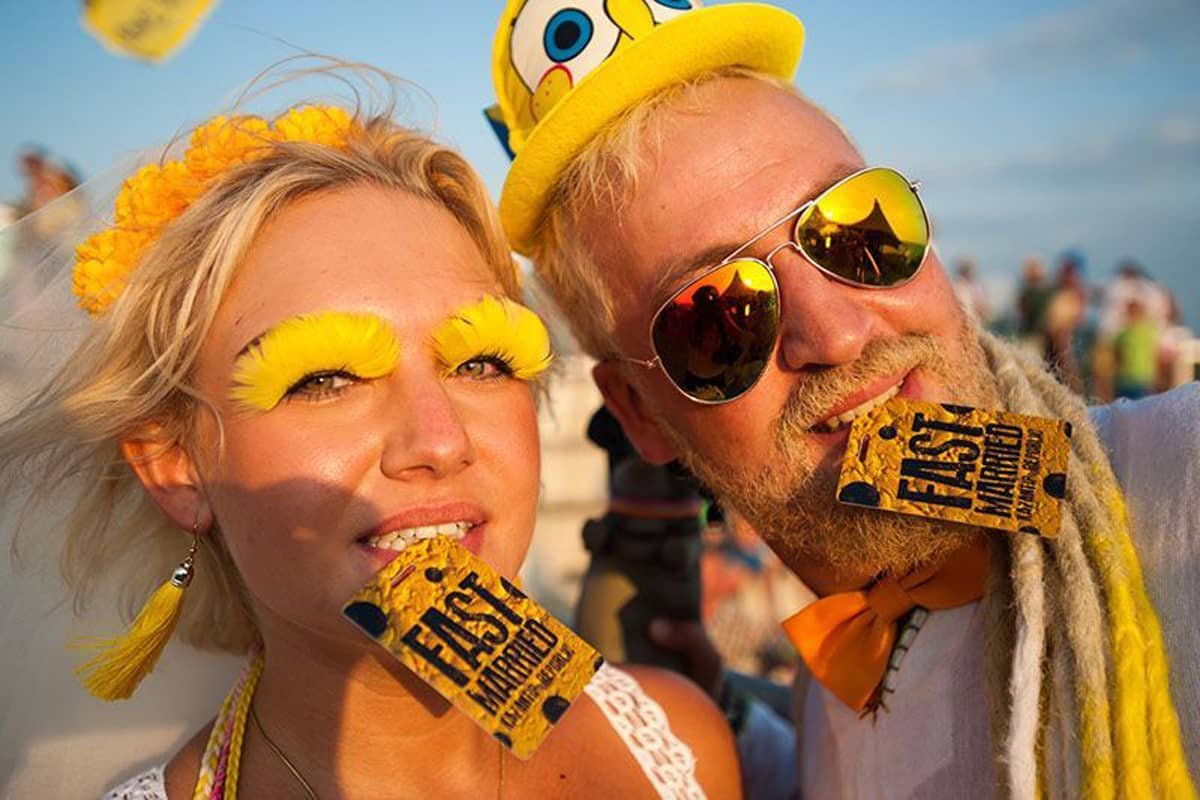 The concept of Fast Married made up back in 2003 was the development of the concept of the Kazantip Republic — if there’s a state and a constitution, there is also an institute of love and marriage that is meant to be regulated somehow. Since the Kazantip Republic was a realized utopia, an imaginary land striving for more beautiful and happy state of things, there had to be a more advanced approach to such a fundamental subject as love, too. We wanted something as spontaneous and romantic as Las Vegas weddings, but a bit more honest and brave—without veiled hope and illusions that it will last ’till death will do us part’, without bitter smack of disillusionment later, but admitting and celebrating the fact of the love’s transience and fragility. Impetuous love unions, that could be tied and untied quick and easy and last as long as the passion lasts, seemed to be a fit. So the Fast Married institute had been established along with the Ministry of Love and The Constitution had been amended accordingly.

The Constitution. Article 15: On the whole territory of the Republic love is welcome and encouraged in all of its aspects, but sexual promiscuity. For the avoidance of doubt, there is a special social institute FAST MARRIED, meant to legitimate citizens’ relationships. Citizens suddenly fallen in love with each other may effect quickie marriage in heaven, i.e. get through The Fast Married ceremony. Quantity of heaven-made wedlocks FM is not limited. And God bless your unions! 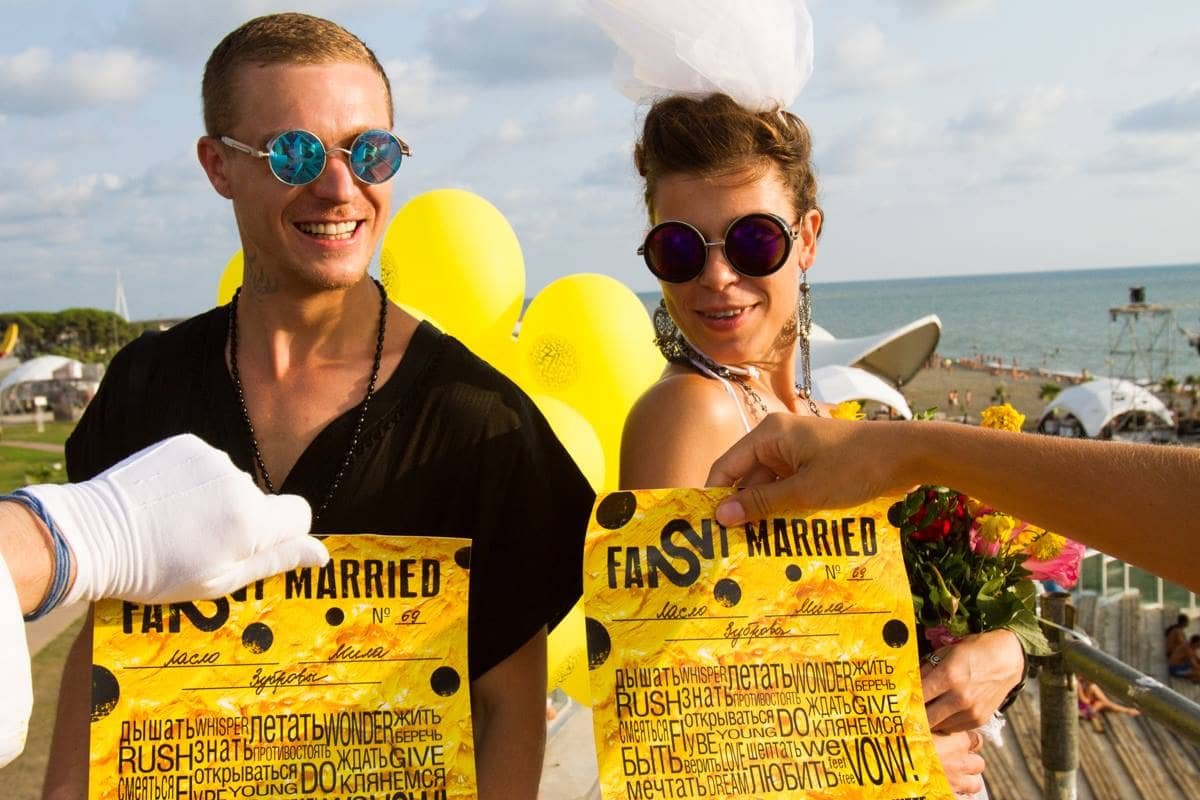 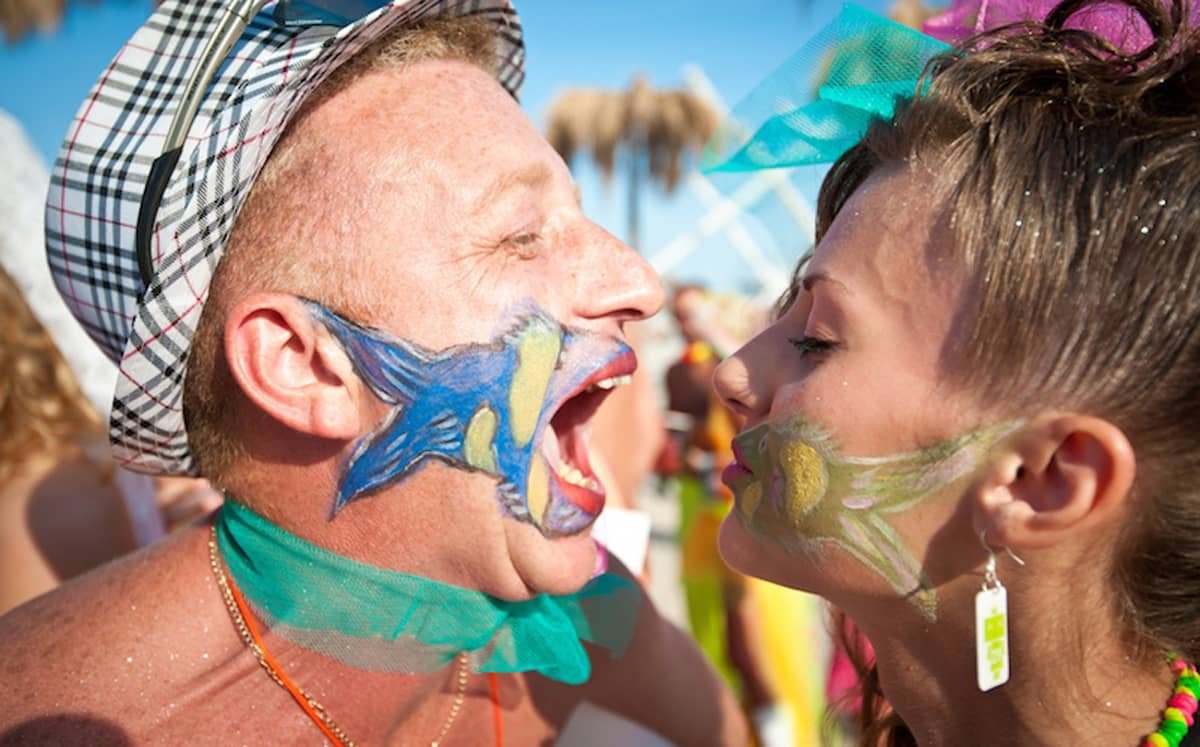 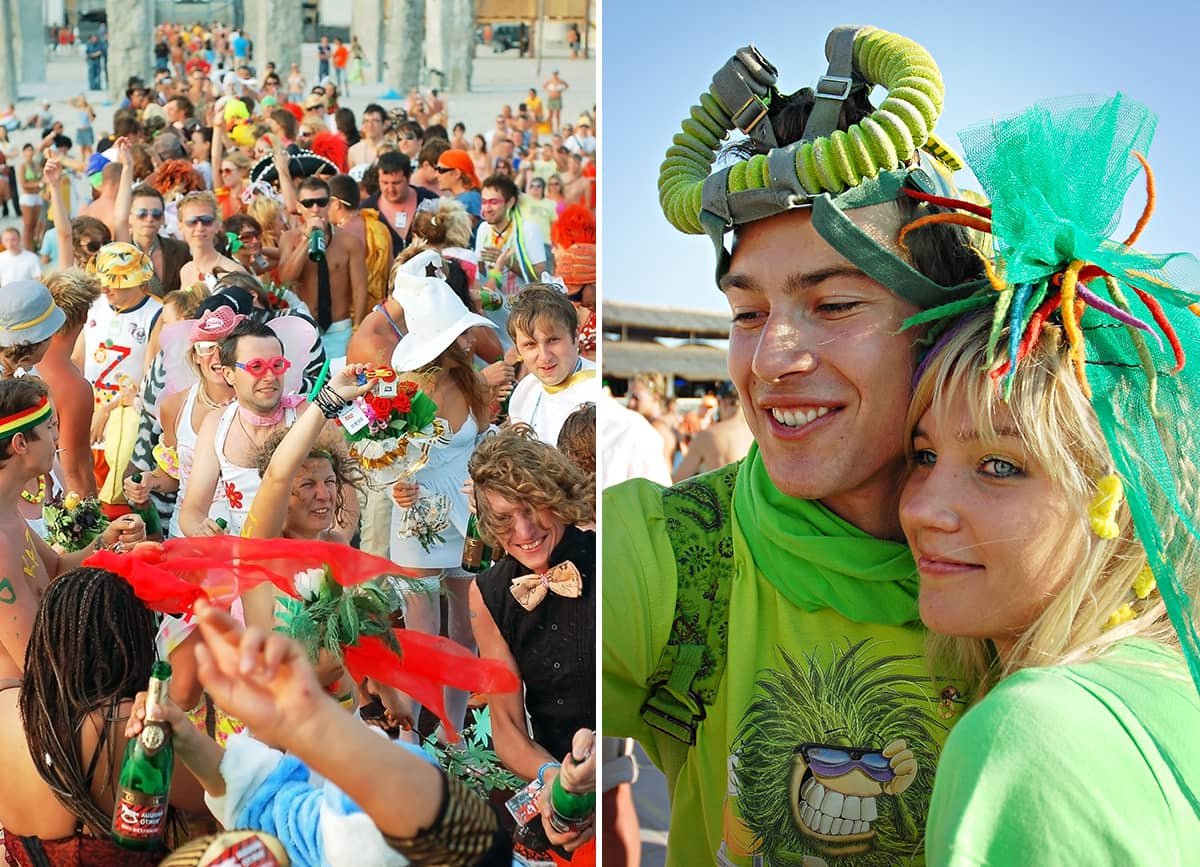 During The Fast Married Ceremony at the tower called The Stairway to Heaven—we sought to increase the odds of happy made-on-heaven marriages—enamored citizens got a document confirming that they are madly in love and made a marriage on the basis of mutual passion. Signing it and pronouncing romantic oaths, the fast-married didn’t promise anything unfulfillable like loving each other till the rest of their days—no hypocrisy and blah-blah-blah. The only things they promised were to love each other truly and deeply until they no longer love; to meet at least one dawn and one sunset together, and remember this night forever.

We are positive most of them did. And for many people who underwent the playful ceremony and gave each other their improvised or prepared self-written vows, it became the beginning of genuine love relationships and family life, and the most significant and symbolic act of it. During the years hundreds of married and dating couples were coming to Kazantip with their gangs to have this masqueradish ceremony captured on film and etched on their memory. To keep exactly this funny document issued by the fictitious Department of Random Relations of the Ministry of Love framed on the wall. 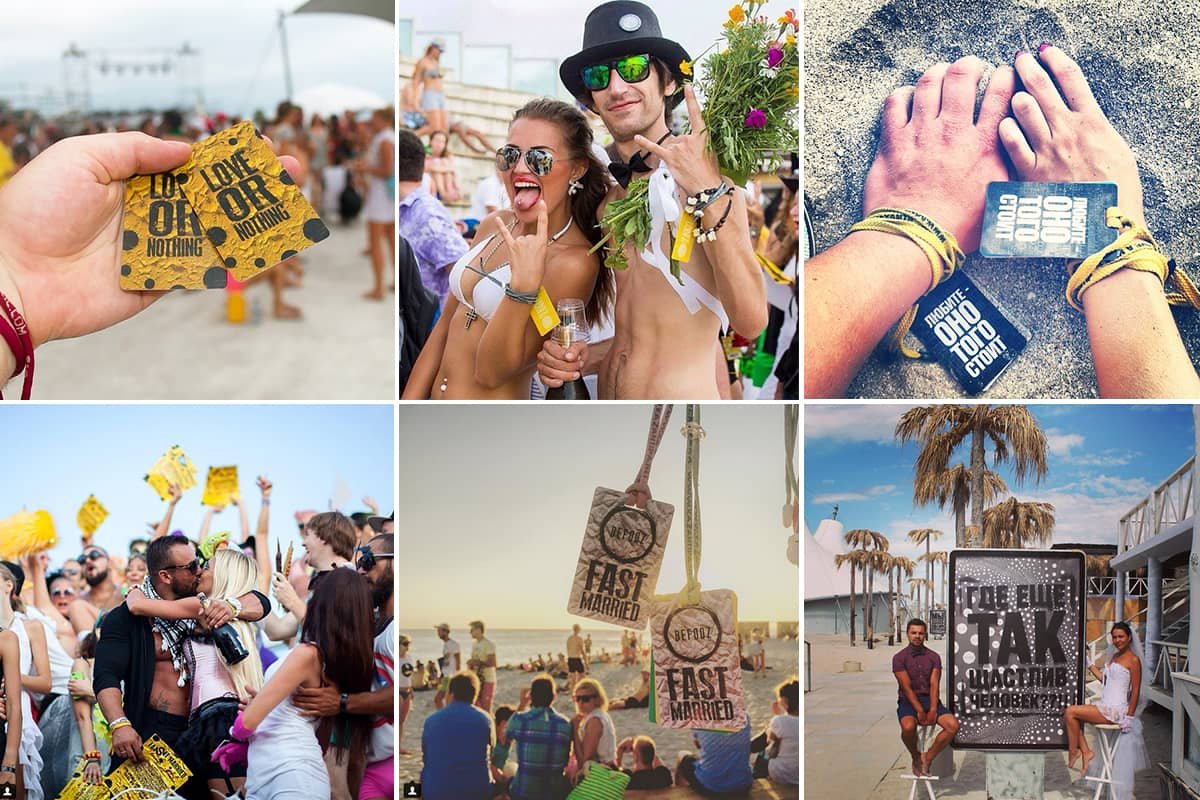 Now, what is the real meaning of this seemingly superficial insitute of Fast Married? Well, let’s see.

Nothing strengthens a brand more than ideology, legends and traditions. Fast Married was one of the most ancient and popular Kazantipian traditions. It’s a part of the narrative that the brand had been telling all along, letting people fall for its charm and humor. Disguised as a joke, it is, in fact, a love fairytale everyone dreams about and that, thankfully, happens in life much more often than one could hope.

Article Six of the Constitution: BE THE ONE YOU WANNA BE AND LIVE YOUR LIFE YOUR WAY is an indispensable constitutional right of a citizen. FROM THE ONE YOU ARE TO THE ONE YOU COULD BE is a constitutional duty. Citizens neglecting their rights and duties are considered to be idiots and… they may thank themselves for that.

Article Eleven of the Constitution: Freaks are considered to be the National treasure protected by the Ministry of Culture.

Through Fast Married we broadcasted the brand’s essential values, such as love without borders and conditions, beauty of passion, honesty, equality, self-expression, creativity, humor. For all the years of the project’s existence we hadn’t issued a single release mentioning that Kazantip is LGBTQ friendly and stand for guy pride—no bombastic slogans, it was just obvious and natural, running through the project’s core ideology. We stand for one’s dignity and freedom. Be who you want to be, love who you want to love. Be weird, we do love the weird, we are weirdos incorporated, the most weird polity on earth. Express yourself freely, just try to find a way to become the one you could be—i.e. someone better and happier. Fast Married was another way to declare these values—neither gender, nor amount of people desiring to marry mattered. Same sex newlyweds? Pff, who cares, there were cases of 40 friends marrying each other simultaneously, a person marrying a goat, a guy with a rubber bride and many other much more interesting precedents. : ) 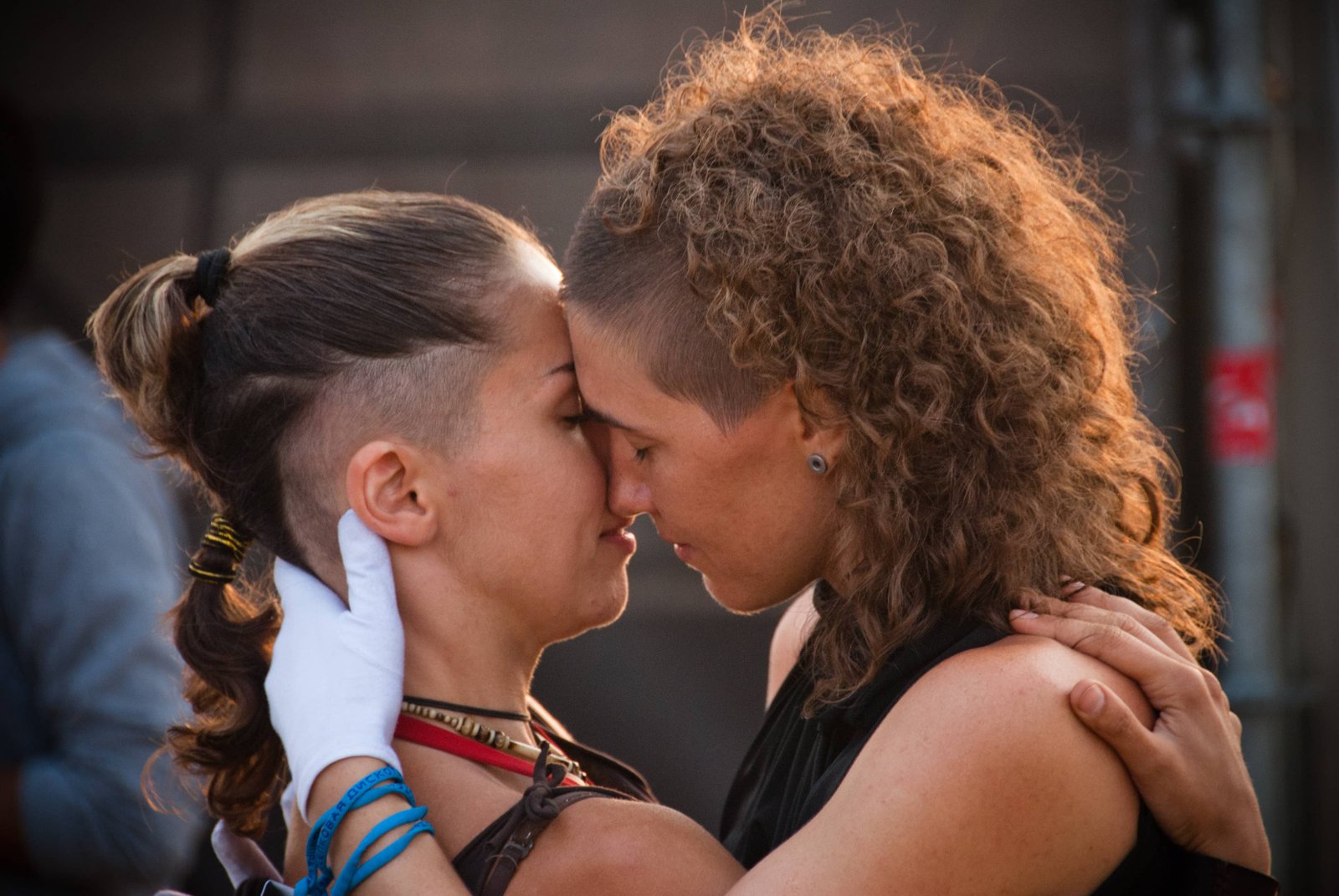 At certain point of dynamic growth the project faced the problem of misperception—Kazantip had turned into a country of sex tourism for many foreign guests, falling under misadvertising of the European tour-operators who were selling the festival as a place where beautiful Ukrainian girls are ready for sex with every english-speaking stranger. There was the need to explain that it’s not so, and even the need to regulate the guests’s behavior. Promotion of the Fast Married institute and the relevant article of the Constitution helped to fix it.

The Criminal Code. Article 3: ‘Sexual harassment and caddish behavior towards citizens of the Kazantip Republic, however easy to get they may look is penalized under the Criminal Code as severely as any other crime – with deportation. Besides, despite the prevailing atmosphere of free and easy nudism, promiscuous sexual relations in an inappropriate places are by no means welcome in the republic. The Fast Married institution (Article 15) is intended to regulate sex life of citizens, so, if anything, the Morality Police won’t hesitate to catch you butt naked in the act of wrongdoing.’ 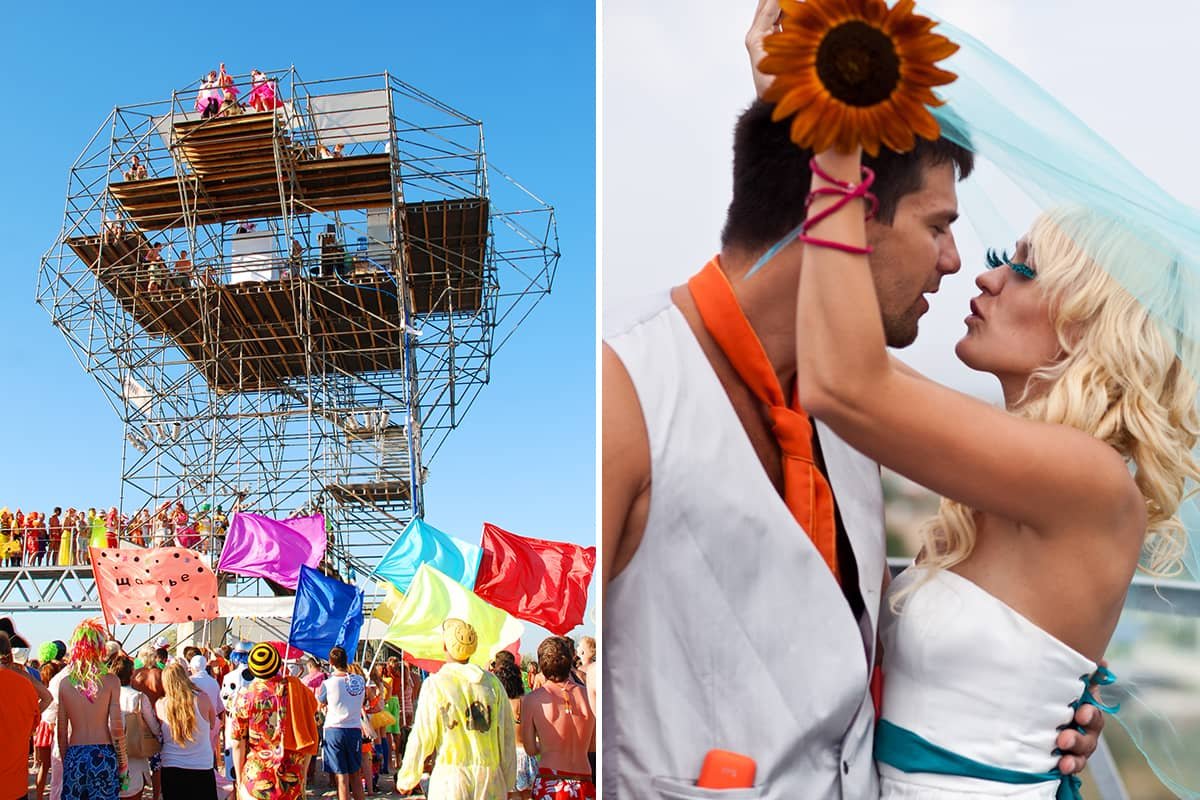 Fast Married was another form of creative communications that provided powerful creative feedback and participation of the audience. The game rules implied that people have to come prepared for the FM Ceremony — dressed in freaky outfits, with gifts and custom vows written for each other. It wasn’t obligatory, but people used to do it, so every Thursday, the official Fast Married Day, was a highly expected event — the spectacular costumed show, a small version of Love Parade. This is was the unique creative content produced exclusively by the audience, that made people deeply involved and formed tight emotional bonds with the project.

Now, 15 years later, Fast Married conception is starting to lose its exclusive association with Kazantip and has become a widely used term—other festival events here and there have Fast Married ceremonies as a part of their entertaining program. Well, it just proves the concept’s vitality, we guess.